A special mixture of minerals, enzymes and amino acids are combined to form liquid oxygen, or at least that’s what NuScience Corporation claims. Nuscience markets CELLFOOD oxygen drops as a health supplement that detoxifies and provides bio-available oxygen to the body.  This claim among others are far fetched and lack scientific evidence. What makes things worse, the company does not provide specific amounts of any ingredients that are used. This makes it hard to determine which ingredient if any is providing the marketed health benefits. Is CELLFOOD oxygen drops 99% water with a negligible amount of minerals, enzymes and amino acids? Or does it have unsafe concentrations of deuterium sulfate (sulfuric Acid-D2) which the company admits is one of the ingredients. No one really knows. All we know is that CELLFOOD oxygen drops have 328 mg of something called Proprietary blend for every eight drops that are used. And since Deuterium Sulfate is listed as the first ingredient, it is the most potent ingredient with-in the Proprietary blend used. 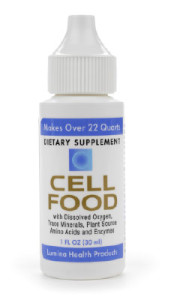 Looking online at places that sell CELLFOOD oxygen drops surprisingly has mostly good reviews from customers. Amazon alone had an overall rating of 4.3 out of a possible 5. Every store I found had nothing less then a 4 out of 5 rating. This is unexpected from a product that has claims that don’t make much sense. So one of two things are happening here. Either  (#1) most of these reviews are fake and are being purchased from the company itself, or (#2) this product makes people feel good but has nothing to do with the oxygen claim.  Of course #1 is very possible. Companies are buying reviews now more then ever. Some companies exist just to provide fake reviews for anyone who pays. This has become a reality of today’s online marketplace. #2 is also very plausible. People might actually feel better when taking CELLFOOD oxygen drops. It can maybe boost energy, fix a mineral deficiency, or even give a placebo effect. One thing to remember is feeling good is not always an indication something is healthy. You can feel good after eating a candy bar, but is the candy bar really healthy? Drinking alcohol can also make you feel great, but it’s actually a toxin. Get the point? Feeling good doesn’t always equal healthy.

A study tested 15 volunteers to see if 2 oxygen promoting supplements would increase blood oxygen levels. Study concluded that both supplements did not have significant effect on blood oxygenation. This reinforces that the “good feeling” that so many customers describe has nothing to do with oxygen. But yet the company states CELLFOOD oxygen drops sole purpose is to increase oxygen within the body. Something doesn’t add up here. So if the company itself is wrong about why the product would help the human body, what else are they wrong about?

A study tested a total of 40 patients divided into two groups of 31 and 9. 31 patients were given CELLFOOD to test whether any benefit can be noticed by questionnaire.  Study concluded that CELLFOOD oxygen drops can improve fibromyalgia symptoms and quality of life. This sounds pretty good at a distance but in reality this study doesn’t tell us anything. First, the study is based on a questionnaire. Which for a small group of patients can have a large margin of error. Second, this questionnaire is based on the persons opinion of how they feel. We already know that CELLFOOD oxygen drops can make a person feel good without having an effect on actual health. Third, just because patients answered they felt better has no indication whether it had any direct effect on the Fibromyalgia itself.  Replacing the CELLFOOD oxygen drops with a candy bar might have produced the same results.

No scientific evidence shows CELLFOOD oxygen drops are healthy. Whats worse, the oxygen health claims are mostly not even scientifically possible never mind tested. CELLFOOD is built on a foundation of the unknown. The less you know the better. It starts with the ingredient list and continues to the health claims. The company purposely either leaves out information or makes generalizations to cover up contradictions. Do your research before using.

Read about another remedy that has no scientific support.