In lab studies, Vitamin C has shown itself to be a very powerful anticancer nutrient. For years, people have been trying to find various ways to increase absorption and produce higher levels of Vitamin C in the blood. With out a doubt, taking Vit C by intravenous injection produces maximum blood levels. However, this might not always be feasible due to cost and inconvenience. Because of this, some have started to promote alternatives. First being a mega dose of regular Vitamin C spread through out the day to create a compound effect. Second, taking a liposome vitamin C mega dose to increase absorption efficiency by means of bypassing certain digestive restrictions. When comparing regular Vit C to liposomal Vit C in terms of bio-availability, liposomal Vit C is clearly superior. But how does liposomal Vit C compare to IV Vitamin C? And can a mega dose liposomal Vitamin C cancer treatment regimen be effective?  Can it really reach blood levels high enough to initiate an anticancer response?

The liposomal Vit C cancer treatment regime has not been tested in any studies. However, Vitamin C IV infusion has been tested on cancer patients and has failed more than once. More on that here. Unfortunately, a Clinical Trial in 2008 and another trial in 2013 both showed no anticancer response. By comparing blood levels to both liposomes and intravenous injection, liposomes don’t even come close. A study in 2008 testing Livon Labs Lypo-Spheric liposomal Vit C showed that a mega dose of 36 grams resulted in blood levels of 400 uM.

Compare that with blood levels of 49 mM reached by one of the Vit C IV studies and we see a gap larger than expected. Intravenous resulted in about 122 times more Vitamin C in the blood stream than liposomal Vitamin C. So if Vitamin C IV couldn’t produce an anticancer response, how could liposomal Vit C possibly do so? It’s pretty much impossible for a liposomal Vit C cancer treatment regime to be effective. 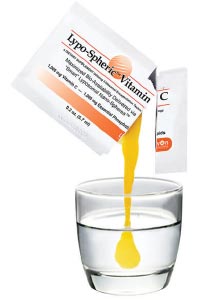 Some studies have shown that Vitamin C can be cytotoxic to certain cancer cells at about 300 uM. This is mainly the reason why mega doses of both the regular and liposomal Vitamin C has become so popular. This might also be the argument most use to justify using these forms of Vitamin C as cancer treatments. But, what happens in a lab petri-dish is not the same thing that happens in the human body. That is easily proven by countless lab studies failing to replicate results in humans. Furthermore, one cancer cell affected by low doses of Vitamin C doesn’t mean other types of cancer cells will react the same way. As we saw in both clinical trials, 49 mM was not effective for any of the cancer patients in the study. This automatically makes you really question the 300 uM lab results everyone talks about out of context.

We can see by the blood levels that a liposomal Vit C cancer treatment regime has almost no chance for success. Using liposomal Vit C as a stand alone cancer treatment is not a good idea. Combining it with other treatments might be something to look into, like Apatone has managed to do. However, the results of the intravenous studies really puts everything into perspective. There is really no way to justify taking the liposomal Vitamin C cancer treatment regime alone. The whole concept of that regime would be to reach blood levels as close to intravenous levels as possible. But, if IV levels can’t even produce an anticancer response, then what’s the point?