Many forms of Oleander are promoted as cancer treatments. The two main types are Oral (DIY) and Drug Injection. The oral type consists of all the treat yourself versions like Oleander Soup Cancer treatment, OPC Plus pills, and anything else found online. The Drug injection form is an actual drug developed from the oleander plant by a company called Nerium Biotechnology. The drug is named Anvirzel. Even though the drug is based on the same Oleander plant as all the home remedies,  you should not consider them equal. A lot of confusion and hype surrounds the treatments above. Even the credible injection drug. 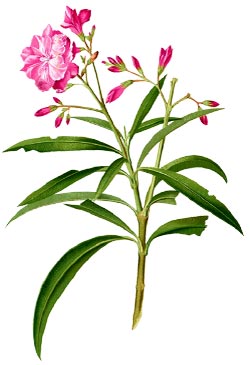 One of the scariest things about the Oleander Soup cancer treatment is its popularity. Numerous websites and forums dedicated to it exist. They all provide nothing but positive information about positive results people have had with using the Oleander Soup Cancer Treatment. Of course all these sites either sell Oleander like products or link to other sites that sell various treatments. All this wouldn’t be an issue if the claims can be somewhat backed by science. As usual, the claims are only backed in two ways. Testimonials and Lab Results.

Testimonials are easily forged and very hard to verify. Take those with a grain of salt. Not much more to say on that topic. Now lets talk about Lab Results. Lab results like mouse studies or studies performed on a petri dish are not the same as human studies. These lab studies are not in any way saying results can be expected in humans. Yes Oleander has Anti-cancer effects that are shown in Lab studies. Yes, Oleander works on mice. Yes, thousands of other plants have had similar results. Yes, most will still fail to work in humans.

Because of Oleander soup cancer treatment having no human studies, using the Injection drugs Anvirzel credibility seems obvious. The release of an actual drug that will be tested on humans, indirectly adds some credibility to the home cancer remedies. This is a big negative coming from an overall positive step forward.  This drug being developed is the best thing that can ever happen to the Oleander soup cancer treatment supporters. But that might not last for long. If the drug continues to fail in human studies, this might turn away a lot of people that would normally support the oleander home treatments.

Normally trying one of these home remedies if your heart desires would only result in a waste of time. In other words no other harm in general is most likely to come to you.  Time which is still very important might be your only loss. Trying the oleander soup cancer treatment on the other hand might be different. It’s not as pleasant of a treatment as trying some of the others. People complain about very upset stomach, Nausea, and fatigue. Having to go through those side effects when it hasn’t been properly tested on humans doesn’t seem like a very good idea. IMO.

If oleander is ever to work on human cancer it will either be in the form of an injection or IV drug. And this drug is trying to do just that. By making it an injection, dosage issues and certain side effects can be circumvented. The reason why oleander can be anti-cancer is because it contains cardiac glycosides, oleandrin, odoroside, neritaloside ,aglycone oleandrigenin and many more active compounds. The ones listed above are all contained in the drug Anvirzel. Cardiac Glycosides are usually used as a treatment for heart failure but shown to be active for cancer as well. Without getting to deep, these compounds interfere with certain processes within the cell. These processes enable high concentrations of calcium to be stuck inside the cell. This in-turn inhibits proliferation and simulates apoptosis. But does this drug actually work in humans?

The answer is NO, so far. The drug was tested for dosage in a phase 1 trial including 18 cancer patients that completed at least a 3 week cycle. The study reported that no objective anti-tumor responses were seen. Even though this was only a phase 1 study and was only testing dosage, anti-cancer response could have been noticed. Disappointing news. For an optimized, dosage controlled drug to show no anti-cancer response is an eye opener. If a researched drug disappoints, what do you expect the soup version to do?

Another phase 1 trial was initiated testing Anvirzel in combination with chemotherapy but was recently withdrawn prior to enrollment.

What Do You Think?