Niacin is another name for Vitamin B3. When Niacin is ingested in its pure form a flush occurs not too long after. This Flush is caused by a 14 to 1200 times increase in prostaglandin (PGD2) as well as increases of 9 alpha and 11 beta-PGF2 at skin level. For some, this is the desired effect since many people believe the flush itself has beneficial health effects. For others, its a inconvenient side effect that many would like to avoid. Different forms of Niacin like, slow release or flush-free forms are available to minimize the chance of the famous flush. The downside to these modified counterparts is the amount of niacin absorbed can be greatly reduced. But whether you are taking niacin to experience the flush or taking it for other reasons, there are risks. If you are taking B3 for any reason you should know about all the Niacin flush side effects you might encounter. 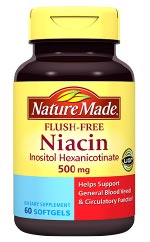 How To Avoid The Niacin Flush?

As i stated before, various forms of niacin are sold to minimize the chances of a flush. But if you are still experiencing flushing either with modified forms or pure niacin you can do things to help. The easiest thing to do is take niacin with food. Taking niacin on an empty stomach will increase the risk for all the niacin flush side effects stated above. Another effective method is taking an aspirin or ibuprofen to offset the niacin flush. Finally, studies show building a tolerance to niacin by taking a consistent dose for a long period of time can minimize or eliminate flushing altogether.

Is blood thinning on the niacin flush side effect list? The answer is no. A study showed that niacin did not increase the bleeding time and had no meaningful alteration on platelet function.

What Is Niacin Proven to Treat?

CANCER: Of course data shows niacin possibly prevents against cancer. However, Niacin by itself has never been tested on cancer patients. But when Niacin, Coenzyme Q10, and Riboflavin was given to breast cancer patients taking Tamoxifen, pro-angiogenic markers were lower then with Tamoxifen alone.

CHOLESTEROL: Many studies have shown that niacin reduces heart disease and effectively lowers bad cholesterol and triglyceride levels. In many cases niacin performed just as well as popular prescribed statins. In one study Statin plus niacin performed better then doubling dose of statin.